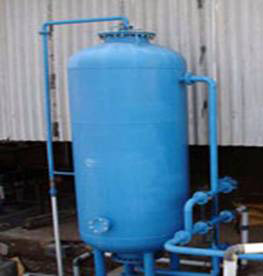 Oxidation/filtration can be used as a special case of pressurized granular-media filtration where the granular media catalyzes the oxidation and precipitation of iron and manganese. Manganese-oxide (MnOx) media, which include manganese greensand and pyrolucite, are commonly used in oxidation/filtration processes because of their unique adsorptive and catalytic capabilities. Greensand is manufactured by coating glauconite with manganese dioxide, while pyrolucite is a naturally mined ore composed of solid manganese dioxide. Greensand media has been shown to be capable of removing up to 80% of arsenic by oxidation/adsorption.

In oxidation/filtration processes, water is passed through a column of MnOx media which adsorbs and catalyzes the oxidation of the iron and manganese. The filtering capacity of the granular MnOx media then retains the precipitated iron, manganese, and arsenic until it is backwashed out of the column. Backwashing creates waste water and sludge, which the water system must properly dispose. Arsenic appears to be removed primarily by the iron precipitates as opposed to those of manganese. Water systems with low levels of influent iron (less than 1.5 mg/L or less than 20:1 ratio with arsenic) may want to consider adding ferric chloride prior to oxidation. It is generally recommended that green sand be preceded by a 12 inch anthracite cap to filter any precipitated iron particulates before the green sand.

In order for greensand to retain its adsorption and catalytic oxidation capabilities for iron and manganese removal, the media must be regenerated with permanganate or chlorine. Typically these oxidants are added ahead of the filter where they provided continuous oxidation of the contaminants as well as regeneration of the MnOx media. Arsenic adsorbs to the iron floc formed in this chemical oxidation step and is physically filtered from solution by the greensand. Any arsenic that is not oxidized is adsorbed onto the MnO2 surface of the greensand particles.